June 2016 I dreamed or rather I thought about the environment on the earth-like planet. The next day I drew this here. 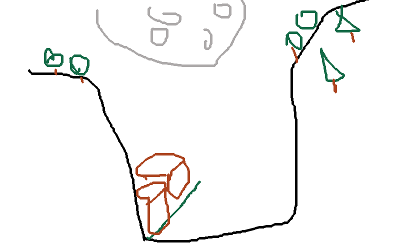 Almost a year later I accidentally found a picture that came pretty close to my idea. The light would be a little reddish and the walls on the right and left even steeper and farther apart.

(On Mars, the light is also weaker, but after a while we humans perceive the light as here on Earth. The images we saw from Mars are already adjusted to our perception, for example brighter).

I do not really like to write and I have no talent, my bad luck I have a lot to say. Göthe once said in terms of spelling: for him that's not very important because he always dictated his lyrics. I would have rather assumed that he has written down his own texts by candlelight.