A game based on my book series is in development. A playable version can be downloaded here.

This version is free. 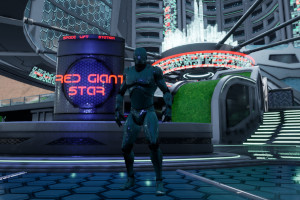 The game is in an early stage of development. I would like to make it well-known and maybe I will find some support for it. The game will be a masterpiece, I can assure you.

»Red Giant Star« is a game based on the book series of the same name by Konstantin T. Salmann. The book series is about an Earth-like planet inhabited by humans, and they are technologically in about the 22nd century. What starts as an unspectacular event turns into an epic conflict between humans and machines. No, the humans are superior, and Nevon stands alone with millions of decommissioned robots, parked everywhere after global warming, against high-tech human soldiers. Why is it that only Nevon can control the robots? Because the engineer achieved the technology 150 years ago with a little alien help. But the aliens secured the systems with their own DNA because they didn't trust humans. The engineer has long since died and the robots continue to do their work for the public. And Nevon, who is also from Earth, got part of his consciousness into an alien human through alien experiments. He now carries the alien DNA and can shut down or repair the systems.... However, the humans soon notice his existence, and now he also only has the option of being killed or, he kills the human soldiers. But the soldiers are now employees who have families.....

I wanted to use the game to better describe my idea of the future. And I'm going to spend the rest of my life finishing the book series, the game and the movies. It's a lot of work, but it's fun!

The game »Red Giant Star« is here in version 6.x. The complete map is 129 km². The demo is not limited, but it contains only about 30 km². The mountains are really 2500 m high. But this brings technical problems, like the sometimes visible grid in the landscape. But I am a writer, something like an artist. I want to have something specific, and the technology has to deliver that ...  The main focus is that the game should be photorealistic, but not require too powerful computers. There will be a world with towns and villages, just like in the book.

Fast driving, off-road on mountain serpentines, fighter jet flying, climbing everywhere, realistic cities of the future, many places that were abandoned after global warming, technology, battles with the help of many dumb robots against high-tech human soldiers. Multiplayer and AI is already planned.

Once I secure funding, I will hire good people....

The game is meant to prepare the youth for the future, not scare them!

Remember well »Red Giant Star«, I have been working on this story now since about 2012. And I will continue to work on it every free minute.

Thank you for downloading the game and have fun with it.

There are no articles in this category. If subcategories display on this page, they may have articles.